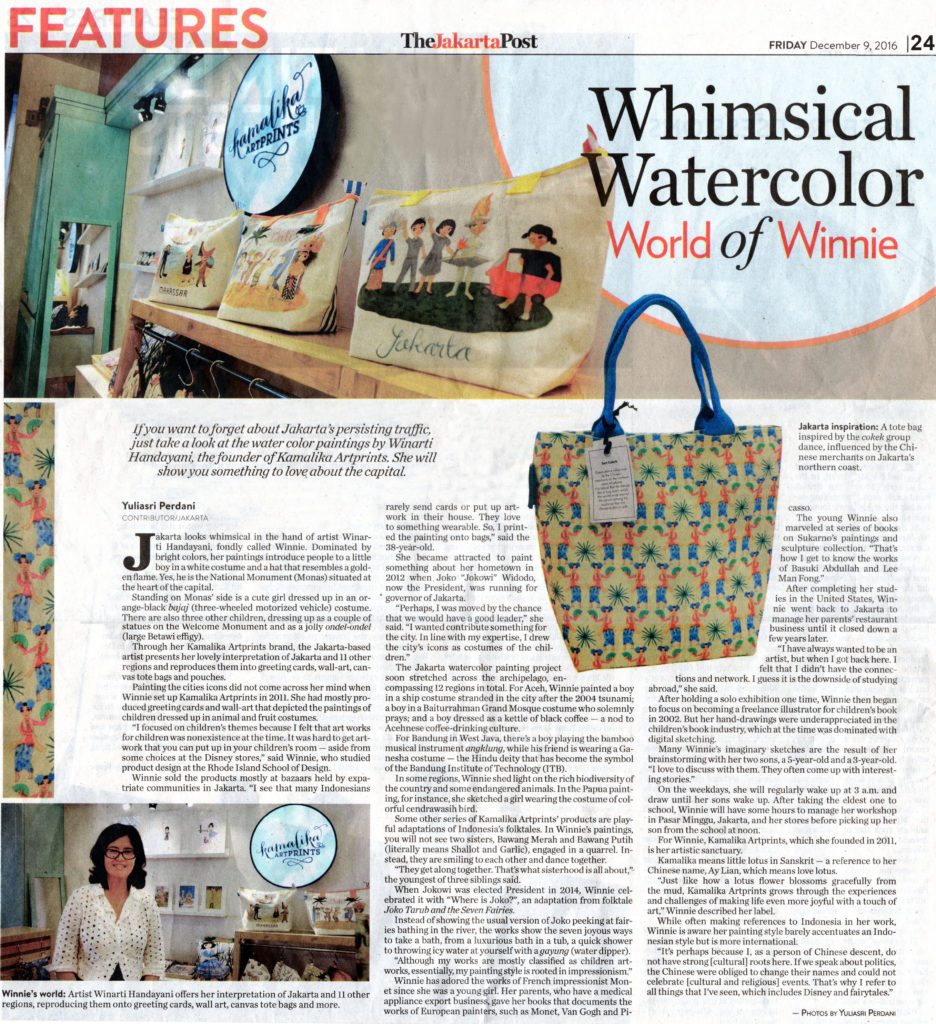 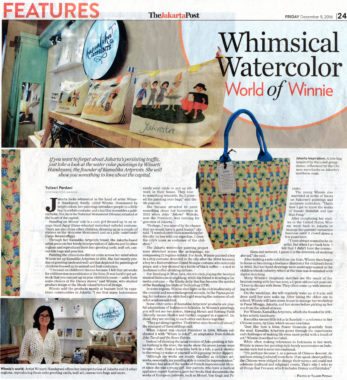 Jakarta looks whimsical in the hand of artist Winarti Handayani, fondly called Winnie. Dominated by bright colors, her paintings introduce people to a litttle boy in a white costume and a hat that resembles a golden flame. Yes, he is the National Monument (Monas) situated at the heart of the capital.

Standing on Monas side is a cute girl dressed up in an orange-black bajaj (three-wheeled motorized vehicle) costume. There are also three other children, dressing up as a couple of statues on the Welcome Monument and as a jolly ondel-ondel (large Betawi effigy).

Through her Kamalika Artprints brand, the Jakarta-based artist presents her lovely interpretation of Jakarta and 11 other regions and reproduces them into greeting cards, wall-art, canvas tote bags and pouches.

Painting the cities icons did not come across her mind when Winnie set up Kamalika Artprints in 2011. She had mostly produced greeting cards and wall-art that depicted the paintings of children dreesed up in animal and fruit costumes.

“I focused on children’s themes because I felt that art works for children was nonexistence at the time. It was hard to get art-work that you can put up in your children’s room – aside from some choices at the Disney stores,” sad Winnie, who studied product design at the Rhode Island School of Design.

Winnie sold the products mostly at bazaars held by expatriate communities in Jakarta. “I see that many Indonesians rarely send cards or put up artwork in their house. They love to something wearable. So, I printed the painting onto bags,” said the 38-year-old.

She became attracted to paint something about her hometown in 2012 when Joko “Jokowi” Widodo, now the President, was running for governor of Jakarta.

“Perhaps, I was moved by the chance that we would have a good leader,” she said. “I wanted contribute something for the city. In line with my expertise, I drew the city’s icons as costumes of the children.”

The Jakarta watercolor panting project soon stretched across the archipelago, encompassing 12 regions in total. For aceh, Winnie painted a boy in a ship costume stranded in the city after the 2004 tsunami; a boy in a Baiturrahman Grand Mosque costume who solemnly prays; and a boy dressed as a kettle of black coffee – a nod to Acehnese coffee – drinking culture.

For Bandung in West Java, there’s a boy playing the bamboo musical instrument angklung, while his friend is wearing a Ganesha costume – the Hindu deity that has become the symbol of the Bandung Institute of Technology (ITB).

In some regions, Winnie shed light on the rich biodiversity of the country and some endangered animals. In the Papua painting, for instance, she sketched a girl wearing the costume of colorful cendrawasih bird.

Some other series of Kamalika Artprints’ products are playful adaptations of Indonesia’s folktales. In Winnnie’s paintings, you will not see two sisters, Bawang Merah and Bawang Putih (literally means Shallot and Garlic), engaged in a quarrel. Instead, they are smiling to each other and dance together.

“They get along together. That’s what sisterhood is all about,”the youngest of three siblings said.

When Jokowi was elected President in 2014, Winnie celebrated it with “Where is Joko?”, an adaption from folktale Joko Tarub and the Seven Fairies.

Instead of showing the usual version of Joko peeking at fairles bathing in the river, the works show the seven joyous ways to take a bath, from a luxurious bath in a tub, a quick shower to throwing icy water at yourself with a gayung (water dipper).

“Although my works are mostly classified as children artworks, essentially, my painting style is rooted n impressionism.”

Winnnie has adored the works of French impressionist Monet since she was a young girl. Her parents, who have a medical appliance export business, gave her books that documents the works of European painters, such as Monet, Van Gogh, and Picasso.

The young Winnie also marveled at series of books on Sukarno’s paintings and sculpture collection. “That’s how I get to know the works of Basuki Abdullah and Lee Man Fong.”

After completing her studies in the United States, Winnie went back to Jakarta to manage her parents’ restaurant business until it closed down a few years later.

“I have always wanted to be an artist, but when I got back here. I felt that I didn’t have the connections and network. I guess it is the downside of studying abroad.” she said.

After holding a solo exhibition one time, Winnie then began to focus on becoming a freelance illustrator for children’s book in 2002. But her hand – drawings were underappreciated in the children’s book industry, which at the time was dominated with digital sketching.

Many Winnie’s imaginary sketches are the result of her brainstorming with her two sons, a 5-year-old and a 3-year-old. “I love to discuss with them. They often come up with interesting stories.”

On the weekdays, she will regularly wake up at 3 a.m. and draw until her sons wake up. After taking the eldest one to school, Winnie will have some hours to manage her workshop in Pasar Minggu, Jakarta, and her stores before picking up her son from school at noon.

For Winnie, Kamalika Artprints, which she founded in 2011, is her artistic sanctuary.

“Just like how a lotus flower blossoms gracefully from the mud, Kamalika Artprints grows through the experiences and challenges of making life even more joyful with a touch of art,” Winnie described her label.

While often making references to Indonesia in her work, Winnie is aware her painting style barely accentuates an Indonesian style but is more international.

“It’s perhaps because I, as a person of Chinese descent, do not have strong (cultural)roots here. If we speak about politics, the Chinese were obliged to change their names and could not celebrate (cultural and religious) events. That’s why I refer to all things that i’ve seen, which includes Disney and fairytales.”